Please scroll down to read news/articles published by CALM

News and Articles by CALM

Thekchen Chöling, Dharamsala, HP, India (July 8, 2020) — In this period of intense scrutiny and heightened stress of police officers around the world, H.H. the 14th Dalai Lama participated in his first-ever dialogue with Western police officers from his residence in the foothills of the Indian Himalayas. In the early hours of July 8, nearly 1,000 London Metropolitan Police officers gathered via the internet to participate in a live video dialogue with the Nobel Peace-Prize-winning exiled Tibetan leader, Tenzin Gyatso, to discuss ‘Developing Compassion During Uncertain Times.’

This first-of-a-kind dialogue with the Dalai Lama was co-organised by Dr. Kumanga Andrahennadi of the ‘Centre for the Advanced Learning of Mindfulness’ (CALM – www.CalmMindfulness.org), in partnership with the London Metropolitan Police. During the historic dialogue, which included an official Metropolitan Police Service welcome by Detective Chief Superintendent Simon Rose, the Dalai Lama shared with the law enforcement officers that “it’s because we have neglected our inner world and an idea of inner peace that we now see a crisis in society.” “And you need to have a sense of compassion for those who are causing trouble,” the Dalai Lama continued. “If there is no other way to restrain the violent, you may have to adopt tough measures, but not at the cost of losing your own peace of mind. Sometimes people think of compassion as a sign of weakness. I consider it a sign of strength.”

Dr. Andrahennadi opened the Dialogue with an introduction, and then later presented a question to the Dalai Lama: “Your Holiness… I use the Buddhist framework of mindfulness meditation techniques to teach meditation. My question is… could you please recommend a particular meditation practice or practices that could benefit the police officers in terms of handling the high-pressure job and their daily work as Police Officers/Staff?” The Dalai Lama replied by suggesting some Buddhist meditation practices for the officers, and added: “The mind appears like a mirror in which thoughts arise like reflections [themselves] that are pure. So, try to sit on it, try to remain and focus on it gradually, to begin with, for a few seconds, then a few minutes, a few hours… If you develop some concentration, it stills the mind and improves its power… These practices, although [they] originate from religious texts, we should use these as a part of our education, our knowledge, and then simply try to increase mental peace and improve physical health. [In] this way you can apply that effectively by engaging in analysis in a purely secular context.” 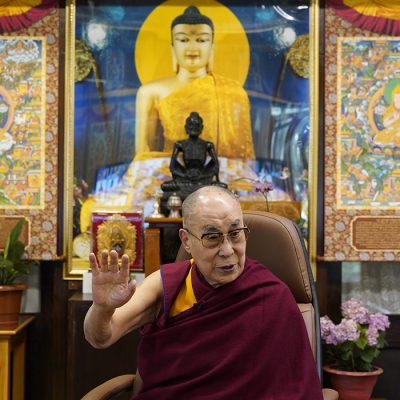 The idea for this first dialogue between the Dalai Lama and London Metropolitan Police Officers originated from a 4-week mindfulness workshop that Dr. Andrahennadi taught to over 100 UK Police Officers and Staff earlier this year entitled ‘Calming the Mind’. In that workshop, attended by officers from a variety of specialties including Managers, Royalty and Specialist Protection Officers, Crime Scene Examiners and officers working in Modern Slavery and Exploitation, the officers explored how to integrate mindfulness and meditation to manage their highly stressful jobs as well as how to develop compassion and inner peace. Statistics illustrate the very demanding nature of policing. For example, over half of UK officers have needed sick leave for mental health reasons in the last 5 years (Police Firearms Officer Association 2017) and nearly 70% of officers actively looking to leave the force claimed it was due to the ‘impact of the job on health and wellbeing’ (as cited by the Police Federation from the 2016 Pay and Morale survey).

During Dr. Andrahennadi’s police course, one officer commented: “Once again a truly amazing experience…It was a great journey where I discovered myself and the awareness around me. Kumanga has taught me countless skills that I will use in my day-to-day life and … helped me open my mind and soul. … it brought so much calmness. I felt the time stopped! I really like that Kumanga also said to extend the love to people we don’t like.” “I must admit I was a sceptic of mindfulness prior to undertaking this programme,” another officer shared. “This was due to the way it has been portrayed. I will continue to practice often and add it to my toolbox.” “I was very anxious before the session,” added a third officer, “but feel I am now learning new tools to be aware negative feelings exist, accept these feelings and find compassion for others and myself.”

Teaching meditation and mindfulness to police officers was a natural fit for Dr. Andrahennadi. “I have always been interested in sharing mindfulness techniques with Police Officers due to the fact that my father was a federal judge who also worked with prisons and law enforcement,” she says. “After completing my Ph.D., I now run mindfulness workshops, courses as well as a One-Year Teacher Training Programme based on the ‘Advanced Mindfulness-Based Practices’ (AMBP) Programme – that is based on a new framework developed through my Ph.D. research for over 10 years.”

Kumanga, originally from Sri Lanka but who has lived and studied in the U.K. for the past 19 years, integrated her Buddhist upbringing with Western approached to mindfulness. “The AMBP programme I developed,” Dr. Andrahennadi says, “is based on the Buddhist philosophical framework of mindfulness supported by the Western scientific aspect through the Mindfulness-Based Cognitive Therapy (MBCT) framework. One of my students, a Police Officer within the current 2020 AMBP Teacher Training Programme, invited me to deliver a 4-week course to her fellow Police Officers/Staff entitled ‘Calming the Mind’. During that 4-week course, it was apparent to me that due to the high-pressure job, police officers were experiencing enormous amounts of stress and other forms of suffering. Their personal suffering was due to the nature of their job, coupled with the current situation of Covid19 and the recent riots, and this led me to deeply reflect on how else I could help them. This is how I suggested that we should invite His Holiness to address the Metropolitan Police Service under the topic ‘Developing Compassion During Uncertain Times”.

Dr. Andrahennadi is due to run the another 8-week AMBP Programme for U.K. Police Officers from 30th September – 25th November 2020. Dr. Andrahennadi’s novel mindfulness courses originated from her Ph.D. research and thesis at the University of Dundee, Scotland, U.K., and integrates original Eastern Buddhist mindfulness meditation methods with the Western MBCT mindfulness techniques. Also influencing her work is her personal training and study with venerable Buddhist teachers such as H.H. the Dalai Lama, Ven. Thich Naht Hahn, H.H. the Karmapa, H.E. Mingyur Rinpoche and H.E. Ringu Tulku Rinpoche. Dr. Andrahennadi has also completed the Teacher Training Retreat for Mindfulness-Based Cognitive Therapy (MBCT) at the Oxford Mindfulness Centre, University of Oxford, U.K., Mindfulness-Based Stress Reduction (MBSR) Retreat at the Centre for Mindfulness Research and Practice at the University of Bangor, U.K. and Mindfulness-Based Education Programme under Ven. Thich Nhat Hanh at the Plum Village in France.

If you would like more information about this topic, please email: Press@CalmMindfulness.org