“Many religious traditions use water for purification and that is why water is really powerful. Water itself is living instruction or living dharma.”

His Holiness the 17th Gyalwang Karmapa 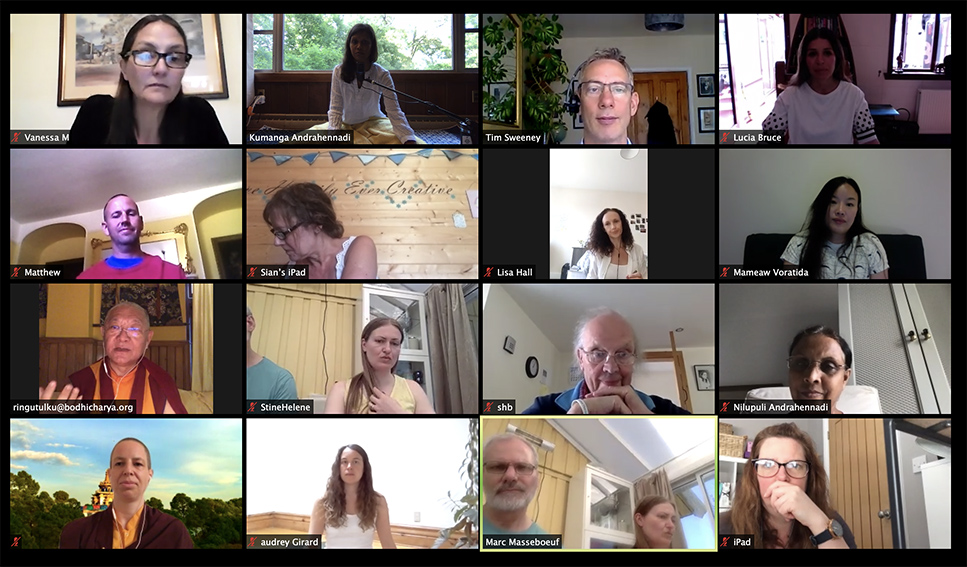 Payment Terms & Conditions: Non-Refundable Deposit of £250 Admission Fee must be paid to enrol on the 1-year programme. The remaining balance of the course fee must be paid in 10 equal monthly payments starting from 1st June 2022 – 1st March 2023. This course fee includes a voucher for a 1-Year FREE ‘CALM Monthly Retreat Membership’ (worth £108), which will allow students to drop into ongoing ‘CALM Monthly Retreats’ for free for a year.

This One-Year Programme will run from May 2022 – June 2023. The LIVE Online Retreats via ZOOM will run from 10:00 AM – 4:30 PM (U.K. time). All live sessions will be recorded and participants will have access to the recordings for lifetime.

On completion, all students will be certified as a ‘Fully Accredited Associate Mindfulness Teacher’ by CALM (and will receive a special CALM Certificate)

The AMBP Teacher Training Programme is a one-year training programme and is delivered by a group of highly experienced and internationally acclaimed mindfulness instructors/trainers (for more information about the trainers, please visit the ‘Faculty’ page within this website). The AMBP Teacher Training Programme aims to develop skills in teaching and integrating mindfulness-based methods of the AMBP International Programme within the context of children, young people and adults. The AMBP Programme has been designed in accordance with the UK ‘Good Practice Guidelines for Teaching Mindfulness-Based Courses’ and is certified and delivered by CALM: Centre for Advanced Learning of Mindfulness, U.K.

The curriculum of the AMBP Teacher Training Programme consists of six modules. These modules are based on the Buddhist philosophical framework of mindfulness, which is also known as the ‘deep path’, as well as the Western scientific applications of mindfulness, also known as the ‘wide path’. As such, the students will learn to deeply experience and teach the mindfulness-based practices from the ‘deep path,’ such as the Four Establishments of Mindfulness, together with the mindfulness-based practices of the water element and Bohmian dialogue from the MBDP curriculum. The students will also learn to deeply experience and teach the methods from the ‘wide path’, including the ‘Body Scan’, ‘Mindfulness of the Breath, ‘Three Step Breathing Space’ and ‘Working with Difficulty’ practices from the MBCT/MBSR curriculums.

What is MBSR, MBCT and AMBP?

Programmes that employ mindfulness for the treatment of mental and physical disorders such as anxiety, depression and chronic pain (Zylowka et al., 2008) are known as Mindfulness-Based Interventions (MBIs). MBI’s, such as the Mindfulness-Based Stress Reduction (MBSR), were developed by Kabat-Zinn (1990) for dealing with mental and physical disorders such as anxiety, long-term-stress and chronic pain. The Mindfulness-Based Cognitive Therapy (MBCT) was developed by Segal, Williams and Teasdale (2002) for coping with depression. The MBSR and MBCT programmes are based on the ‘wide path’ (the western view of mindfulness),

The novel AMBP has been developed by Dr. Kumanga Andrahennadi during her Ph.D. research (at the University of Dundee, Scotland, U.K.) to help recognise and transform our negative habitual tendencies through cultivating positive mind qualities such as mindfulness, compassion, empathy and resilience, as well as recognising the interdependent nature of the phenomena in alleviating suffering (Andrahennadi, 2019). The AMBP programme is grounded within the ‘deep path’ of the Buddhist philosophical view of mindfulness, combined with the mindfulness-based methods of the water element and Bohmian Dialogue.

What is the ‘Deep Path’ and the ‘Wide Path’?

Richard J. Davidson, a well-known neuroscientist, and Daniel Goleman, a well-known psychologist and science journalist, are considered two of the initiators of the mindfulness movement in the West beginning in the 1970s. In their book, The Science of Meditation: How to Change Your Brain, Mind and Body (2017), Richard Davidson and Daniel Goleman refer to the traditional Buddhist framework of theory and practices of mindfulness as the ‘deep path’ and the modern western applications of mindfulness methods such as MBSR and MBCT as the ‘wide path’. While the origins of the Buddhist framework of mindfulness date back over 2600 years, the current western applications of mindfulness have been in existence for over forty years (Williams & Kabat-Zinn 2013).

Emphasising the benefits of the ‘deep path’, His Holiness the Dalai Lama explained that “Buddhism offers many techniques for relieving stress and finding calm in the situations we face every day.”

Goleman and Davidson (2017) considered the acceleration of the modern movement of mindfulness to be a ‘wide path’, which has led to a dilution in the meaning of mindfulness thus missing the significance of its application through the ‘deep path’. In the view of Goleman and Davidson, “in the wake of the tsunami of excitement over the wide path, the alternate route so often gets missed: that is, the deep path, which has always been the true goal of meditation” (Goleman & Davidson 2017, p. 7). Ricard and Singer (2017), who are both famous neuroscientists from France, have stated that further reaching towards our better nature through penetrating introspection is the true goal of meditation.

Pre-Requisites for Training to Teach the AMBP Programme

Please note that in order to qualify to apply for this teacher training programme, you need to have completed ALL of the following pre-requisites:
1) At least one-year of previous regular meditation practice and a deep interest in committing to cultivating a daily meditation practice.
2) Taken part in a LIVE online course entitled ‘Advanced Mindfulness-Based Practices (AMBP) 8-Week Course'(visit ‘Online’ training page within this website).
3) Demonstrate that you have the skills to work with individuals and to facilitate groups. Please visit ‘Enrol’ page within this website to register for the AMBP TT Programme, when you enrol on this course, you’ll receive the complete brochure of the AMBP Teacher Training Programme together with the ‘Booking Form’ by email.